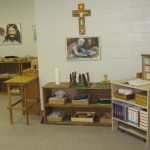 (See Part I here.) I find that the Seven Faces of Easter are the most compelling stories (or set of stories) in our Godly Play “library.” More than any other story, I find the children in the circle (and the adults) are always focused and attentive. I never hear “We already know this one…” or some similar comment.

And yet, this particular year, we didn’t even schedule this story to tell during Lent in our class of 3rd-5th graders. I’m not sure why, as we were all in agreement to focus on some parables of Jesus. (As it turned out, a new parishioner gave us the wonderful gift of doing a Stations of the Cross for this age group, so we did cover the stories; we just did it outside of the “Godly Play” box.) 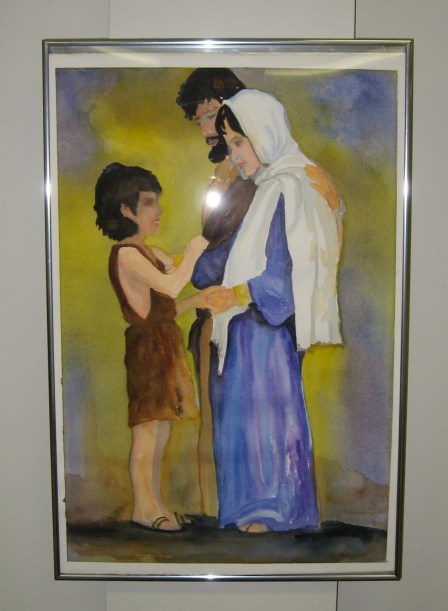 When possible, it is ideal to set up a Godly Play classroom so that the circle of children and adults are surrounded by the stories: the sacred stories, the parables, and the liturgical stories. Although our classrooms have many odd angles, we are able to do a good job of surrounding the circle with the stories on their shelves. 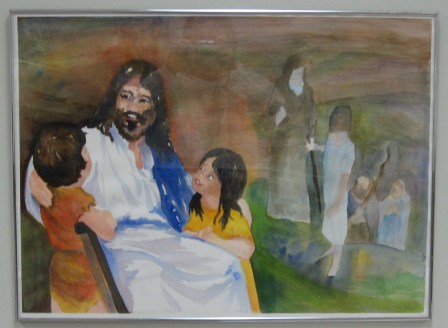 It is nice, too, to surround ourselves with this story, the Seven Faces, every time they enter this classroom. 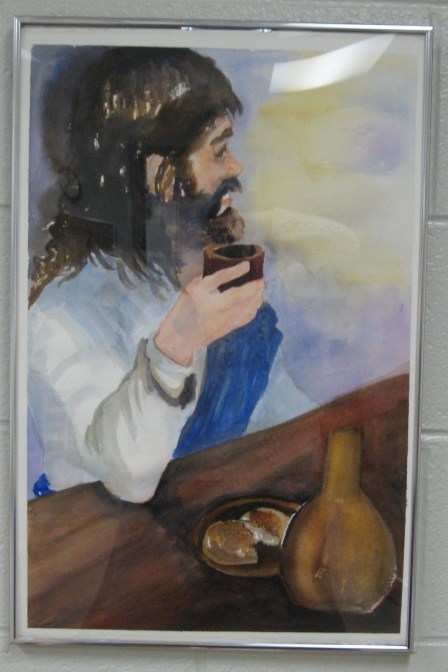 As in our liturgical worship, the practice of our worship should involve all the senses. 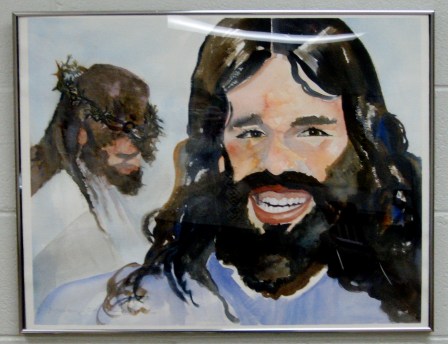 This year we just happened to leave out the words of this story. That, however, doesn’t mean that the story isn’t there. 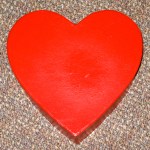 The “Ten Best Ways,” or the story of the Ten Commandments, includes the ten commandments stored in a red heart-shaped box.

To quote the story, “Love God. Love people. God loves us.” That just about sums up Valentine’s Day, doesn’t it? 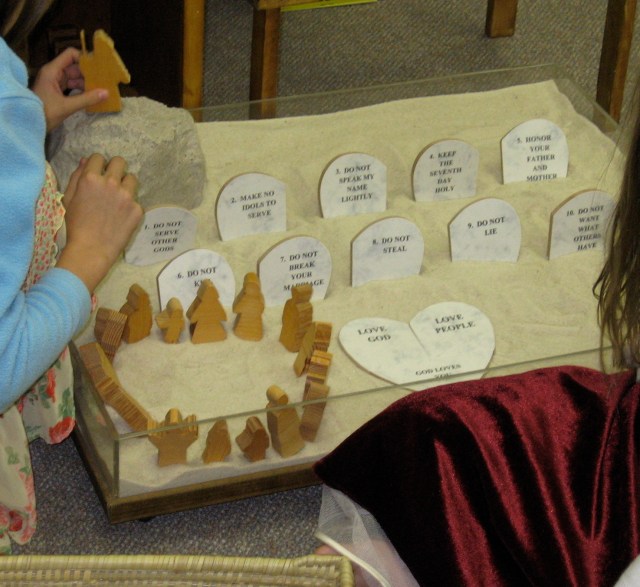 While shopping at a Ten Thousand Villages store very near us, I found this puzzle. I can’t find it now on their website, but it is just the thing to have on the shelf underneath the story of the Ten Best Ways! 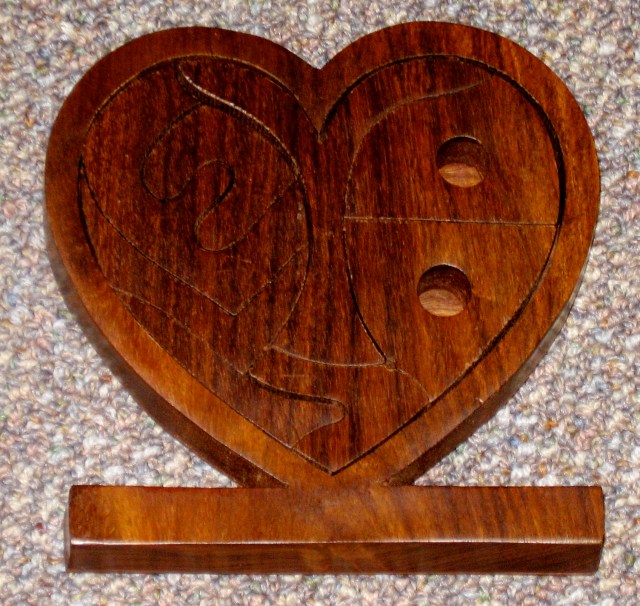 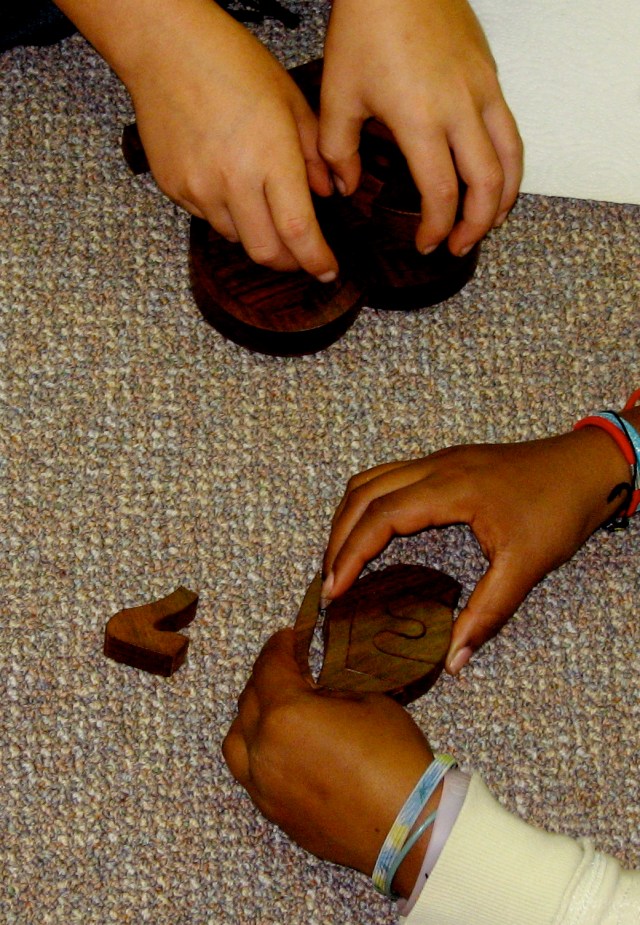 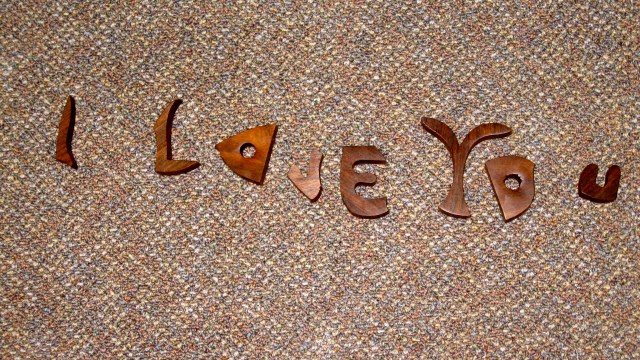 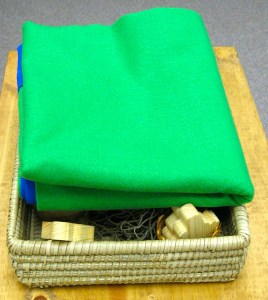 [See “Follow Me” – Making a New Story (Part 1) here. We’ve now used this story two weeks in a row. The class of younger children heard the story yesterday (January 22, 2012). I also had the fortitude to put camera and story together to finish taking the pictures necessary for this post!]

My long-suffering husband returned the cut out wooden figures the very next day. I sanded them down (it’s an excellent time to catch up on TV with absolutely no redeeming value whatsoever). 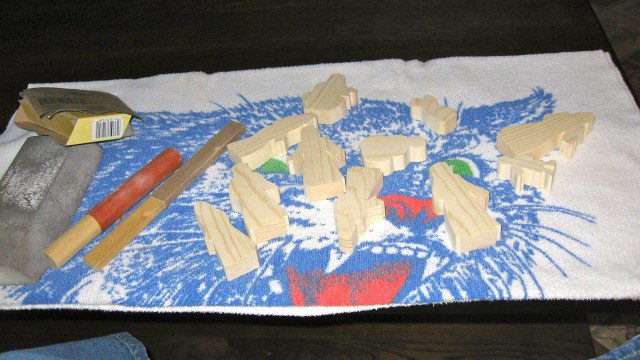 My next step is to oil them. In the beginning, we always used linseed oil, which is terribly messy and smelly. I read somewhere that it’s not good for children – or maybe it was all the warnings on the can – but since then I use this food grade beeswax polish that I found from Nova Natural. I usually put the wax on and leave it overnight. The next day I will buff them with a soft cloth. (That old towel is pretty scary looking when I see the pictures….) 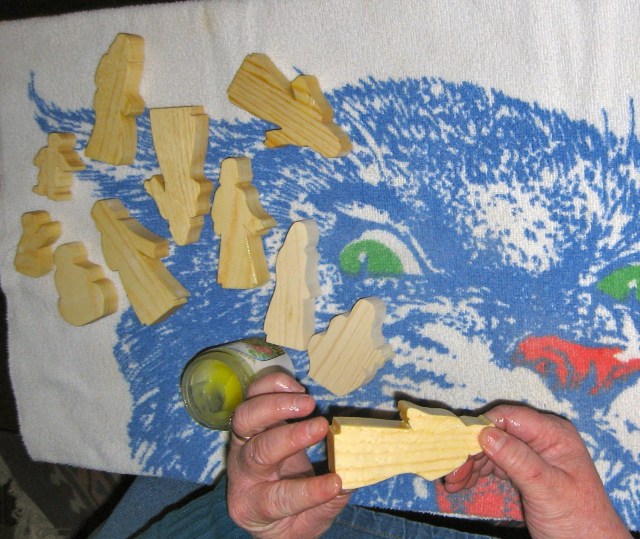 I went to our neighboring big town to the Foam and Fabric store, and I bought the felt. When I got home, I procrastinated as much as possible because I cannot stand cutting out felt. It involves math and straight lines, and I’m not very good at either. This particular underlay also required sewing – a skill I have – as well as curves. I’m not great at making curves come out even, but I decided the Sea of Galilee is also not completely even, either. 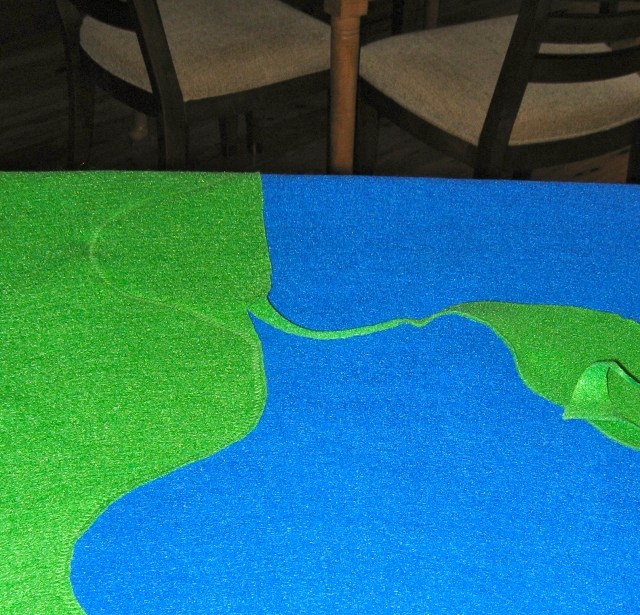 And, at this point, I have enough to tell the story! I wasn’t even the storyteller on deck for this particular story, so I left it at church in our Sunday School class. It is nice, because our younger class will be able to use it on January 22, 2012, so we’re getting our money’s worth out of it this semester. 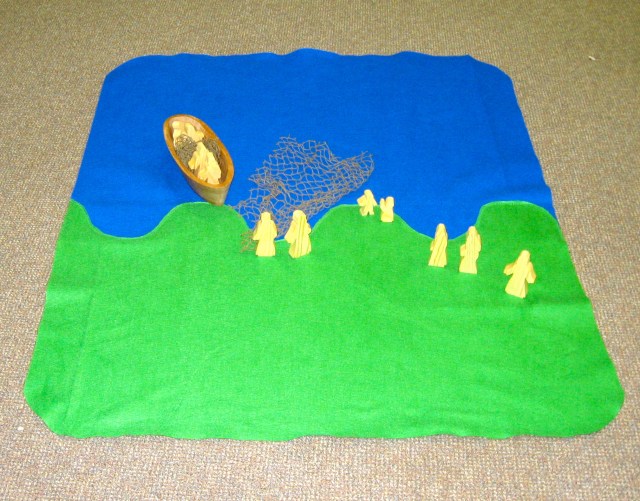 I have two final steps. I always include a small laminated inventory card in each basket. Many times I’ve sat down and begun telling the story when I realize that I didn’t get water in a pitcher for the Baptism story, or that I left the Mount Sinai on the shelf. The inventory cards help me remember the pieces that are stored separately. They are also invaluable when we straighten up the classrooms over the summer. When you count up all the manipulatives that could possibly be in a classroom, this is an important step! I have a form on my computer and type up the contents and print it on card stock. I have a little HeatSeal laminator that takes just a moment to use. 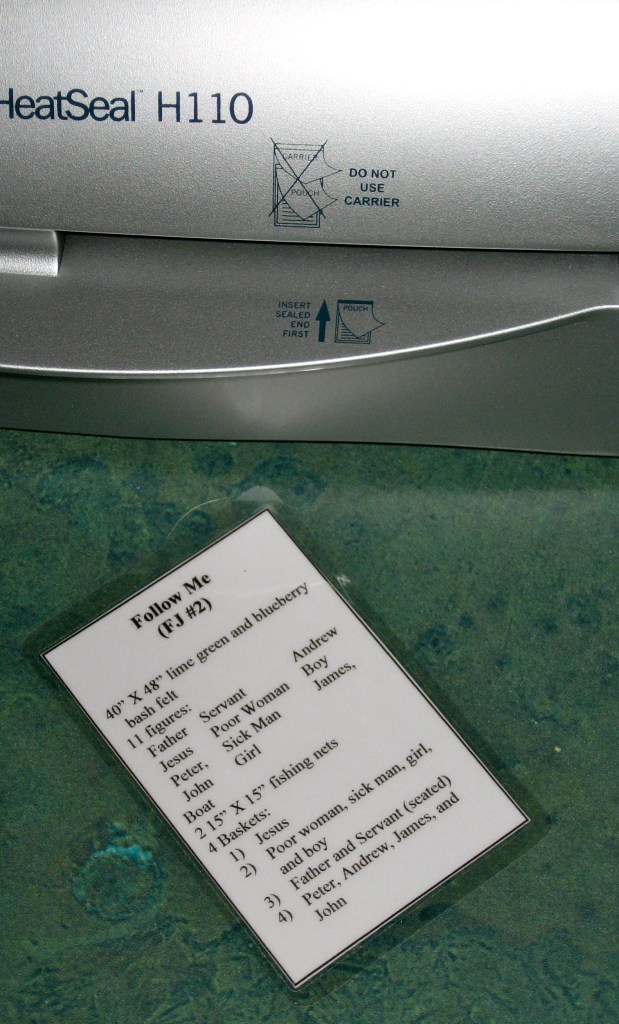 The final step is to find four baskets for the figures. I used to pooh-pooh this step, but I now feel it’s invaluable to separate out the figures so that the storyteller does not have to decide which figure is which (or worse, upend each figure to read a name written on the bottom!). If they are not separated out, we find ourselves staring at a figure trying to decide which character we’re holding. A little organization – or preparing the environment for the storyteller – goes a long way! I used little baskets I found in my supplies, so of course none of them match. 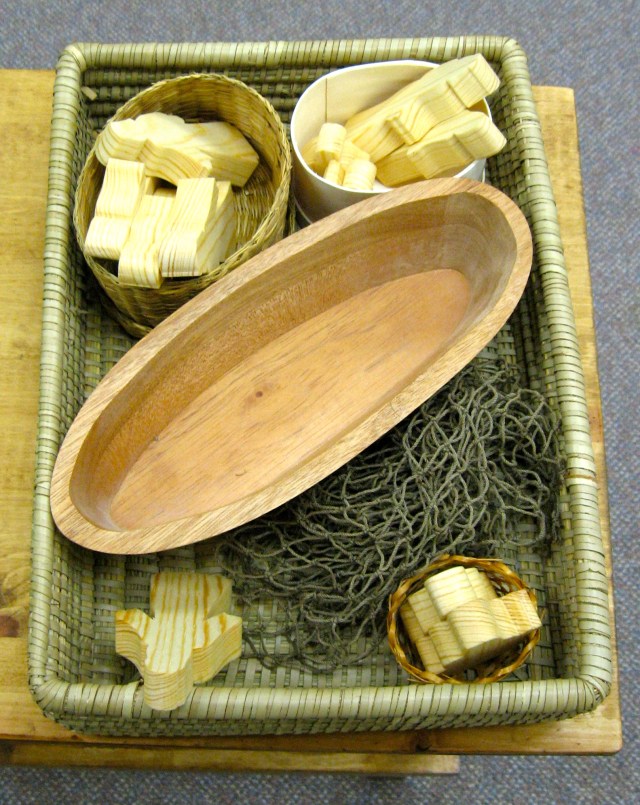 (For the rest of the story, see here, here, and here.)

A few people weren’t able to be at the workshop but had helped immensely with the process during the planning stages. As a thank you, I spent a bit of time creating an “Advent  Workshop To Go Kit” with all the materials we used at the workshop (with the exception of a glue stick and the wood glue).

I told the recipients that the “payment” for the gift would be a photograph of the finished product. Here are two of the photos I received: 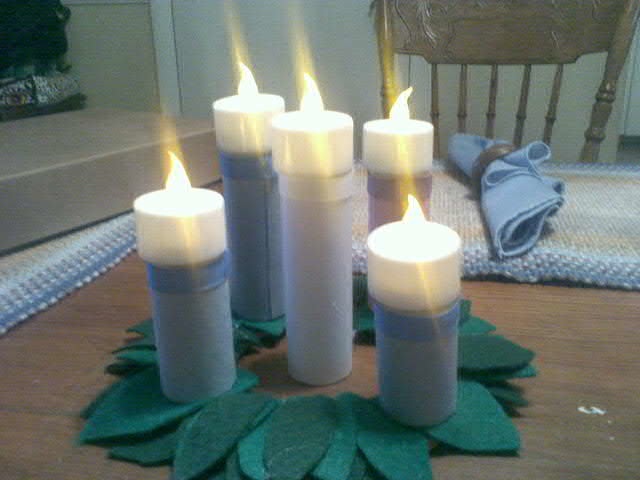 From Ellie, an eighth grader... 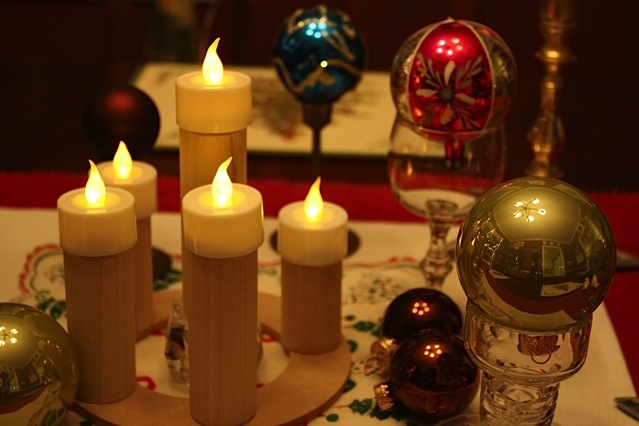 from Fran of on the chancel steps

If you happened to make an advent wreath using our model, would you share a photo with me? 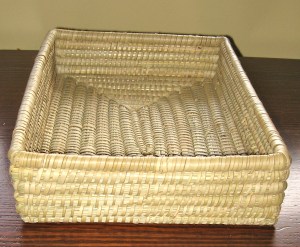 Our team of teachers met on January 6 to discuss the schedules and story selection for the new “semester” – January 8 – May 13, 2012. As we talked, we were anxious to include a story about Jesus calling the disciples. Following Jesus has just such a story – and we don’t have this one in our “library” of Godly Play stories.

Unfortunately (for me) we scheduled the new story for January 15, 2012! Just a week to get ready! (Well, really only six days to get ready since I wasn’t able to start working on it until Monday, January 9.)

We use these baskets from Ten Thousand Villages for our stories, and I had an extra one, so off I go. (Gulp! Now I see that they’re $14 each! When we started using these baskets, I was able to buy them in bulk for $5 each.)

Several many years ago on a beach vacation, I bought this $5.38 fishing net, remembering it was needed for some story or other. Note: Perfectionists canNOT cut out two 15″ x 15″ squares of fishing net. It is impossible. I had to just quit trying and put two smaller pieces in the basket. I’m trying not to think about that right now… (but on the other hand, doesn’t my mousepad from the Georgia Aquarium fit in nicely?) 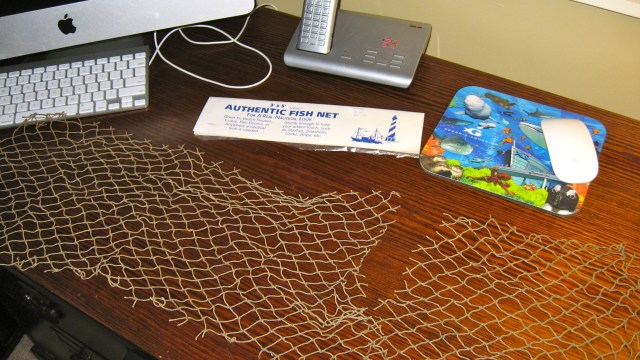 My husband usually cuts figures for me using the shop at his work. I copied the outlines of the ELEVEN figures needed for this story from the back of the book and carefully cut each one out. He magically turns these “paper dolls” that I cut out into the wooden figures I need. 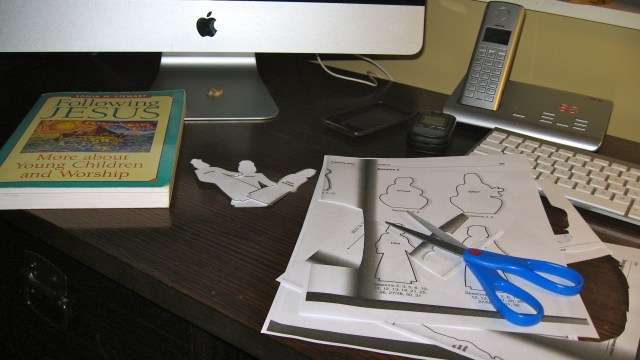 I bought the wooden boat from Worship Woodworks. I could have bought the entire story, but I really enjoy putting the pieces together – for me it is part of internalizing the story, even though I won’t be the storyteller for this one on Sunday.  The boat won’t arrive by Sunday, but we have one already for another story, so we’ll borrow it for this week.

And then, I’m done for a bit. I need to drive to the neighboring town to get felt for the underlay, and then I am hoping that my poor husband has time this week to cut out the wooden figures. More to follow! 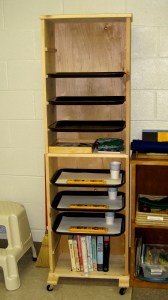 I, the one with the terrible stage fright, love to tell stories. I believe, after all these years, I am excited to see what I will learn from a new telling of the story (specifically, what I will learn from the wondering and the comments). On those days when the children wonder out loud and I can hear the gears shifting and the engines moving, I could tell stories all day long.

However, then the response time comes. Ick. If I had not been enlightened by all I’ve learned about Montessori and Godly Play, I would be giving multiple choice exams to the preschoolers to make sure they understood the three basic points of the story. That would be ever so much more organized than what DOES happen: little girls gather and discuss their boyfriends (BOYFRIENDS?). Boys race around using anything as a violent weapon. Sandstorms in the desert box. It happens. No matter how hard we work at it, some days are just like that.

Now, there are excellent days, too. This post ended with a drawing that made that day worthwhile. We’ve captured some other signs of going deeper into the story, too. Two boys – two very active boys – quietly use the lap labyrinth and sand labyrinth. 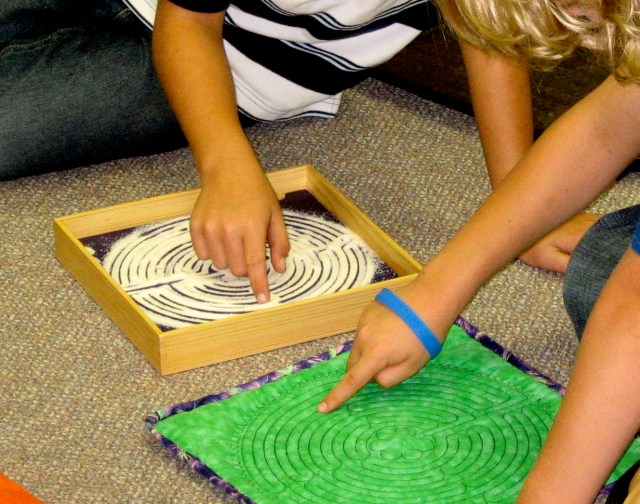 I hope to write a lot about work in the coming weeks because we (the Godly Play team at our church – the ones who would do a much better job writing this blog because they’re so amazing) hope to amp up the art materials and work materials. We’ve tried a few things to set up the classroom so that the children can find materials to make the response time meaningful (see the watercolor trays set up in the work tray shelf picture?)

How We Tell the Advent Stories

Posted on December 5, 2011 by browniesmoke 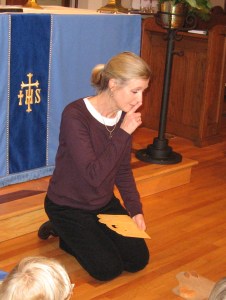 Ever since my oldest (23) was a first grader, we’ve been using the same traditional Christmas Pageant at our church. Our pageant usually takes place in lieu of the 9:00 a.m. service on the 4th Sunday of Advent.

The 1st Sunday of Advent is Thanksgiving weekend in the United States – and no classes for any age take place on that Sunday. On the 2nd and 3rd Sundays in Advent, we hold our pageant rehearsals in the church during the Sunday School hour. We begin by telling the Advent stories on the chancel steps with the children gathered around. It helps to to center them – and us – prior to the rehearsal. Instead of response time, we say something like, “And today our work will be the Christmas Pageant…”

After the presentation of our Christmas Pageant, we all gather in our parish hall for our “Happy Birthday, Jesus!” party. One storyteller tells a version of the Advent/Christmas/Epiphany stories complete with burning frankincense and myrrh, and adds in a bit of the Circle of the Church Year as well. (It’s a great advertisement of Godly Play to the parents and other parishioners present!)

After the story ends, we gather around a lovely cake and sing Happy Birthday to Jesus. If we’ve planned it right, the children then wrap the gifts they’ve brought for a local children’s charity, and we wrap the presents there at the party.